Dewey Beach, Delaware – A $375,000 gift from the state to relocate 5G poles that were sited in violation of local permitting laws can’t be used unless Dewey Beach is able to strike a separate agreement with Verizon.

The money, which effectively removes relocation responsibility from the poles’ telecom company owners, can be used only to relocate the poles and must be used within three years of when the state-Dewey Beach Memorandum of Understanding is finalized. The snag? Verizon told the Cape Gazette it is unable to make any agreement or relocate poles because of a pending lawsuit over the poles, filed by several local citizens in June. The Delaware Court of Chancery issued a temporary restraining order on July 1 preventing Verizon from installing more 5G poles. And the town cannot proceed without a separate agreement with Verizon, Mayor Dale Cooke confirmed at the Sept. 10 regular council meeting.

“Soon, Dewey will have what appears as a shiny $375,000 but not any progress towards solving any of the issues,” homeowner Jeffrey C. Smith wrote in a Sept. 18 email to the town council. “…So long as the funds are conditional on Verizon agreement with the town and any demand Verizon wishes to make, there are plenty of reasons, not considered at the Council meeting, that Dewey might want to reject the now unspendable funds, that were not considered at the Council meeting and which take the shine off the money.”

The town council voted unanimously to approve an agreement between the town and the State of Delaware, authorizing $375,000 of state monies to be used for relocating Verizon’s poles and any future poles at the State’s expense. The motion to approve passed after about 14 minutes of discussion, which largely involved citizen questions about why the state was awarding this money to the town. According to the MOA, the money can only be used to move 5G poles over a three-year period, including any new ones installed during that time by any wireless company. Any unused funds must be returned to the state.

It is unclear whether, if the agreement with wireless companies over relocation fails or remains blocked, the town will be entitled to use any of the money to pay staff, counsel or consultants who may work on the issue.

It is also unclear whether any other coastal communities have been granted money for 5G pole relocation. As of this writing, Dewey Beach appears to be the only one. And it remains unclear who made it happen, although Commissioner Paul Bauer gave some explanation.

Asked why the town was receiving this money when other towns were not, Mayor Dale Cooke replied that “I’m not going to attempt to answer that question.”

The Facts to Date

The surprising news that announced such a huge amount, had a catch as money often does.

IF the Town can reach agreement with Verizon to move Verizon’s Poles. Who Could say no? Well there are reasons… see article here: first

Questions following the Article have arisen:

1. Verizon stated that, due to a third party lawsuit, Verizon refuses to reach agreement with the town, thus preventing the town from spending the money to relocate poles. Residents ask: How is it appropriate for Verizon to tie their agreement to a third party other than Verizon and the Town?

2. Many residents from towns outside of Dewey Beach, are now asking why the Delaware Taxpayers are being asked to pay for Verizon to move its own poles?

3. None of the funds go to Dewey Beach but Dewey would have to administer the program and negotiate with Verizon. How is Dewey going to administer negotiations with a multinational corporation, while also overseeing the bidding process contractors to move poles?

4. Shouldn’t Verizon move its own poles? Why the Taxpayers?

This issue is covered in a letter written with the help of some neighbors, sent to Council on Saturday September 18, posted in the next blog news entry. 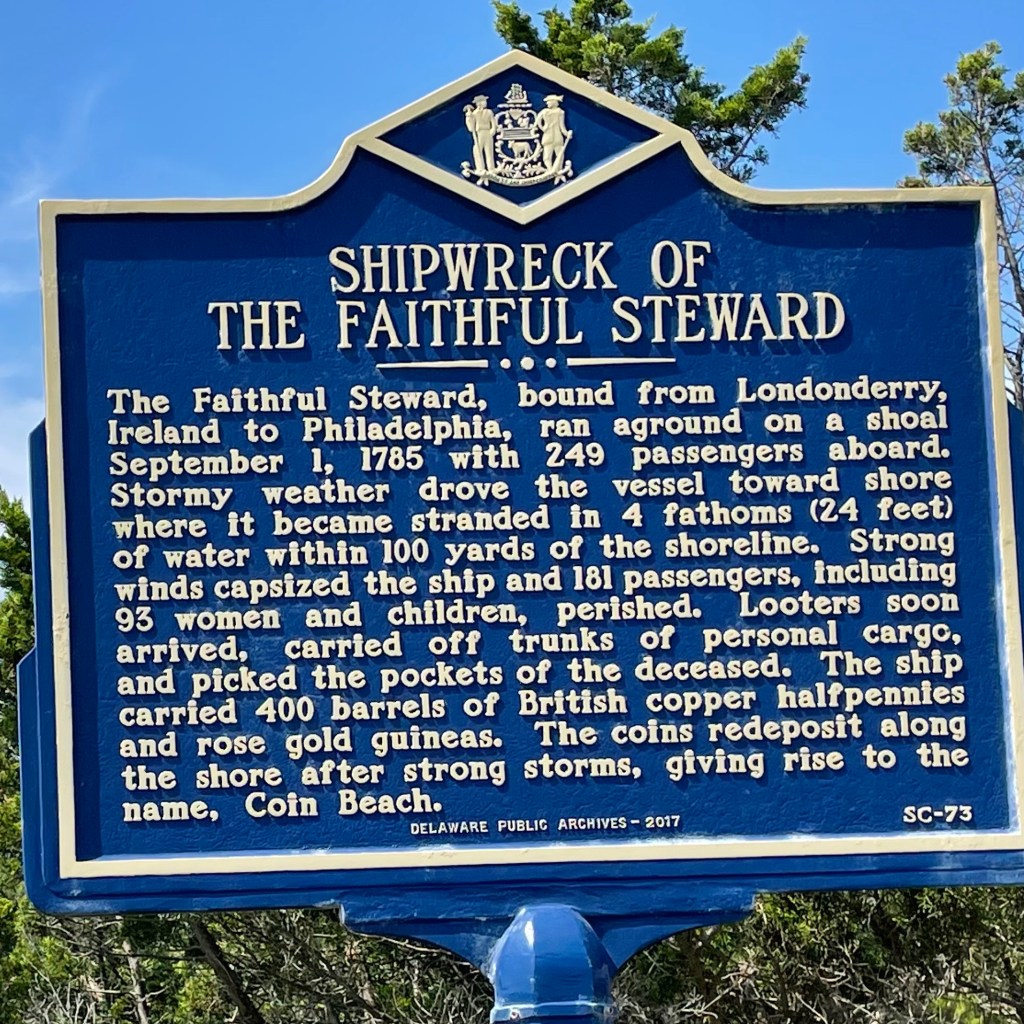 The Faithful Steward site of a 1785 shipwreck

A 4g/5G Pole was placed in the dunes near the site of the shipwreck and closer to it than this marker. This sign was moved across the road and away from the ocean shipwreck site.

New monopole wireless towers and other structures installed by large telecom companies are taking over dunes and being placed in front of Historic sites. These 50ft towers block historical sites and modify seascapes that have existed for hundreds of years.

And many in violation of environmental and historical laws that have protected the shore’s history and natural beauty.

These pristine seascapes and dunes display the beauty of the sand and sea, but much more more…

Recently 50ft Mono-poles installed by giant telecoms began to be appear along the Delaware Coast during the 2020 state of emergency, without public notice or any consideration for the beauty or history their poles blocked.

Verizon began to install 50 ft tall poles in the dunes, and in front of WW II lookout towers, the third oldest lifeguard station in the United States, in same location since 1871, and sites of tragic shipwrecks, such as the Faithful Steward.

Historical laws which should have stopped their installation have not yet been enforced by the State.

The poles followed state legislation passed in 30 states and sponsored by a local representative from the area, but no public notice preceded their installation. And much misleading information that caught everyone by surprise.

Nearby towns have been speaking up and pushing back. But the Seashore State Park has six miles of dunes and wetlands providing open space and spectacular vistas, but it has no permanent residents or protectors. It contains the history of protecting Americans in war and peace, but no organized group to protect it.

Nobody in the state agencies overseeing the Park has yet taken steps to oversee the corporate installs of the seven poles put in so far, and up to 24 more now marked but without permits or public disclosure other than spray paint markings on the pavement along the magnificent seascape.

The Coast’s beautiful vistas, wetlands and nature sanctuaries need the public to stand up now and restore the east side of the roadway to what it has been for hundreds of years.

Faithful Stewards seeks to have state regulators move all of the single company monopoles from the dunes, and once public input is obtained – as it is with all other utility structures – permits can be issued to move the antennas to nearby existing electrical and telephone poles, as has been done in inland locations.

Faithful Stewards was formed in September 2021, after a year of work on the issue by dedicated volunteers, to bring the public into the debate over the future of the Coastline. We invite you to sign up for our news bulletins and along with us, request the politicians restore the shore.